21 year of the Porsche Carrera GT

In September 2000, the Porsche Carrera GT was presented as a concept car. Twenty years on, the V10 engine of the first carbon-fibre standard-production Porsche starts again.

In September 2000, the Porsche Carrera GT was presented as a concept car. Twenty years on, the V10 engine of the first carbon-fibre standard-production Porsche starts again.

It was early in the morning of 28 September 2000, before the sun had even come up, when Porsche presented the Carrera GT concept car to the world’s press in Paris. Walter Röhrl was behind the wheel of the new super sports car. He navigated the V10 mid-engined car with 558 PS around the Place Charles-de-Gaulle, better known as the Place de l’Étoile due to the fact that its cobblestones form a star shape, with the Arc de Triomphe rising majestically at its centre.

As the rain fell, Röhrl had the job of transferring the engine’s sheer power as cleanly as possible from the rear axle to the square’s wet and slippery cobbles in front of the international media. The two-time rally world champion more than rose to the occasion: the photos of Röhrl in the open-top Carrera GT en route from the Arc de Triomphe to the Louvre, escorted by French motorcycle police, caused a sensation among car fans around the world. 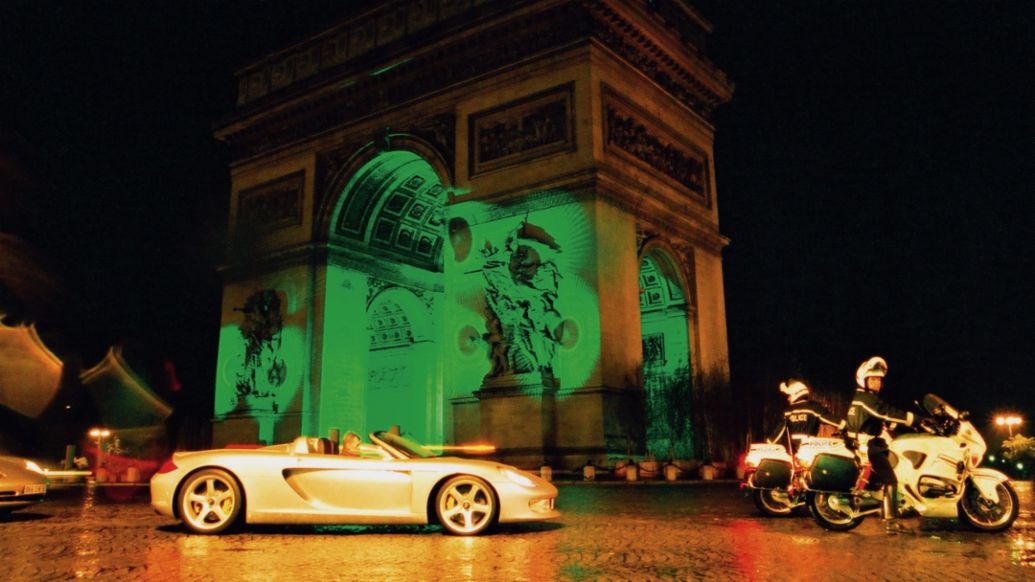 Redefining the limits of what is possible

This was because, with this concept car, Porsche had defined a new status quo for sports cars, and redefined the limits of what was possible at the time. From then on, young children would hang posters of the concept on their bedroom walls, while their older counterparts would dream about it and some would simply want to order it. The only downside of the car was that it didn’t yet exist. Porsche first had to finish developing the Carrera GT – and then build it. Back in 2000, this sports car was nothing more than an audacious vision, developed from the modules of a new racing car that was actually meant to compete for victory in the 24 Hours of Le Mans.

Two decades after the concept car made its debut in Paris, we had planned to return to the Seine with the 612 PS standard-production car. However, as with so many plans in 2020, they were scuppered by the coronavirus. Deemed a high-risk region, the population of Paris was under stay-at-home orders at the time of our planned visit, so we decided to take the Porsche Carrera GT to the Pariser Platz in Berlin, in homage. At the Brandenburg Gate, in October 2020, it is once again drizzling, just as it was 20 years ago in Paris. 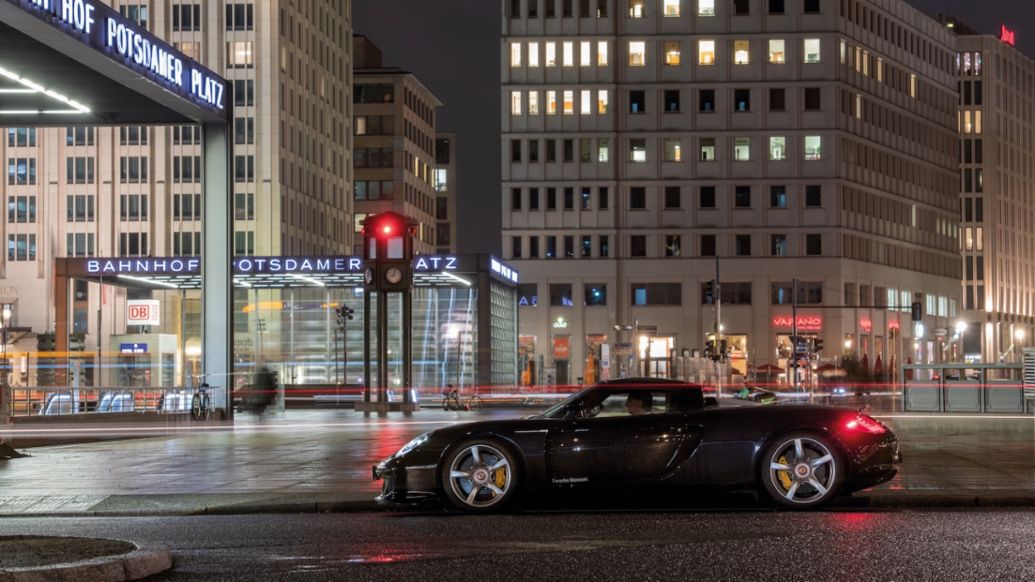 The Carrera GT is still in a league of its own

Despite the pandemic, the Pariser Platz is bustling. Smartphone cameras are trained on the Carrera GT. This Porsche is still in a league of its own. Those gathered can see this, even if most of them no longer recognise the car itself. 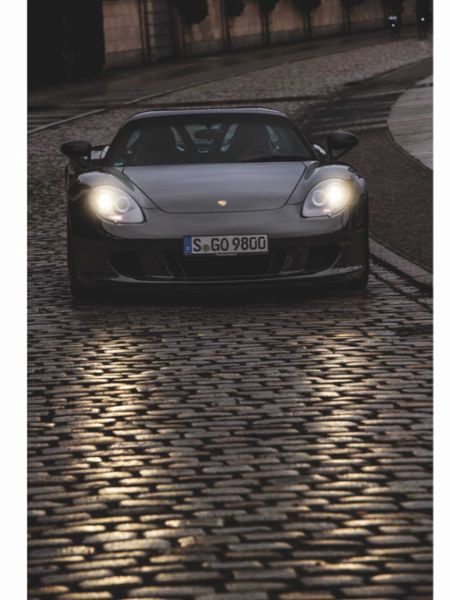 The Pariser Platz in Berlin has cobbles too. I start the engine and work on getting the car moving as unspectacularly as possible, but the Porsche Ceramic Composite Clutch, or PCCC for short, and the V10 right behind my seat don’t exactly make it easy. I get an inkling of how it might have been for Röhrl back in Paris – a hint too much acceleration on the wet cobblestones and the 20-inch rear wheels will spin without mercy. And that is despite Traction Control. Too few revs and you run the risk of stalling the ten-cylinder engine behind you – which would be a little embarrassing when all eyes are already on the car.

Striking contours from the team of Harm Lagaay

So I pull it together and it’s off through the Berlin night, eventually out in the direction of AVUS. With revs between 2,000 and 3,000 rpm, we slip past Potsdamer Platz and the reconstructed City Palace to the Museum Island in second and sometimes third gear. Tourists and locals do double-takes of the car, and give the thumbs-up signal. The contours of the Carrera GT are the work of the team around the then Porsche chief designer Harm Lagaay; under his direction, they designed a piece of automotive art that even after 20 years has lost none of its appeal.

However, this appeal is also down to the unrivalled technical basis of the Carrera GT. The project started as outlined with a pure racing car: the long-secret Porsche LMP2000. This Le Mans prototype, never used in a race and called the 9R3 internally, was completed in 1998 and had a V10 engine. The racing car's chassis was made of carbon fibre.

A technical tour de force for the sports car world

For whatever reason, the decision was made not to return to Le Mans for the time being. Instead, the idea came about to shake up the sports car world with the best technical highlights of the 9R3. This was followed by the development of the concept car presented at the Mondial de l’Automobile in Paris. A host of reasons meant it would take two and a half years until the standard-production version made its debut at the 2003 Geneva International Motor Show. One of these was the aerodynamics: the standard-production version was to be unchanged from the concept car. To deliver a reliable downforce for the standard-production car that would ultimately top out at 330 km/h, a sophisticated aerodynamics concept had to be developed. The only visible expression of this is the electrically extending rear wing. In addition, the entire carbon underbody is panelled; together with the rear diffuser, the underbody geometry produces a ground effect like on a racing car that as good as glues the car to the road. 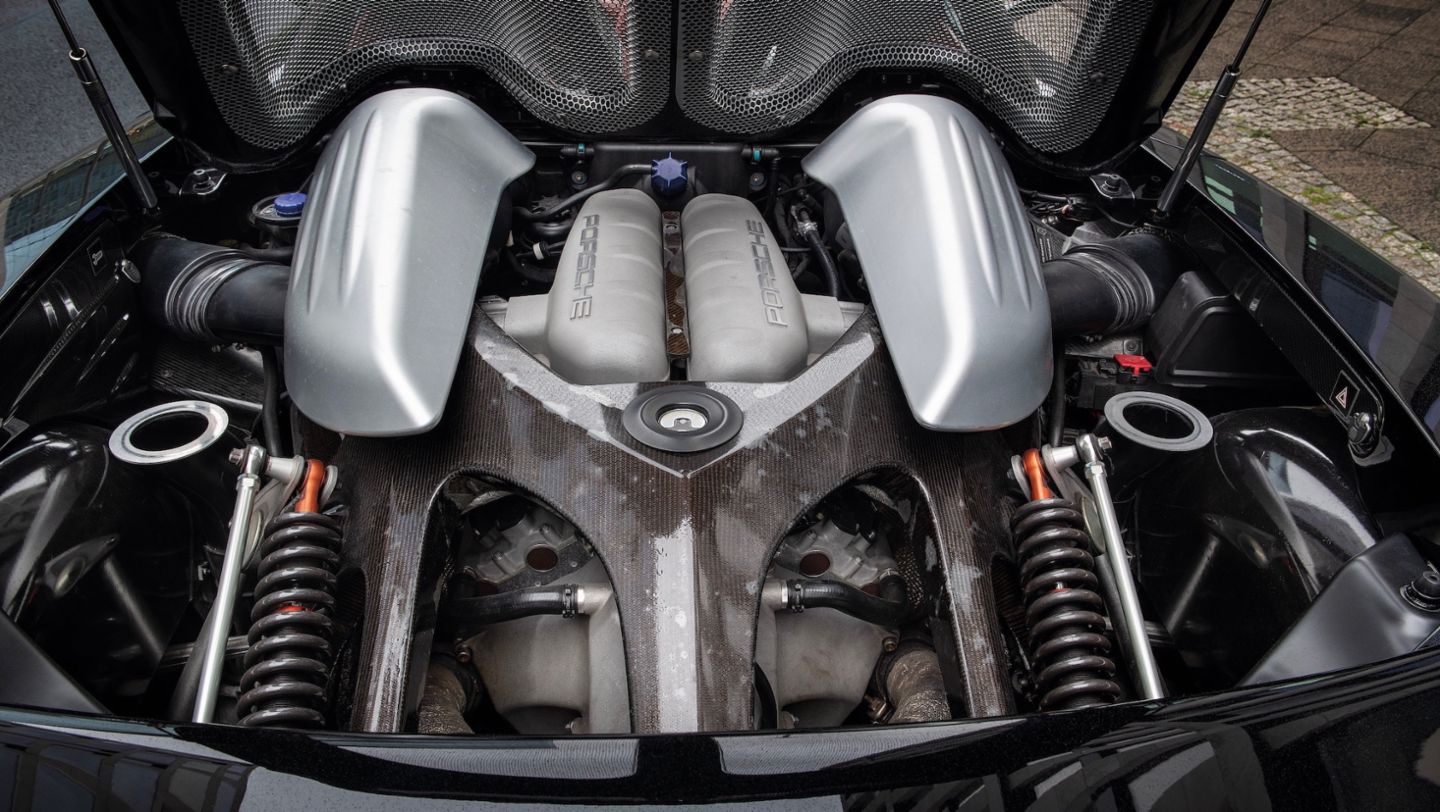 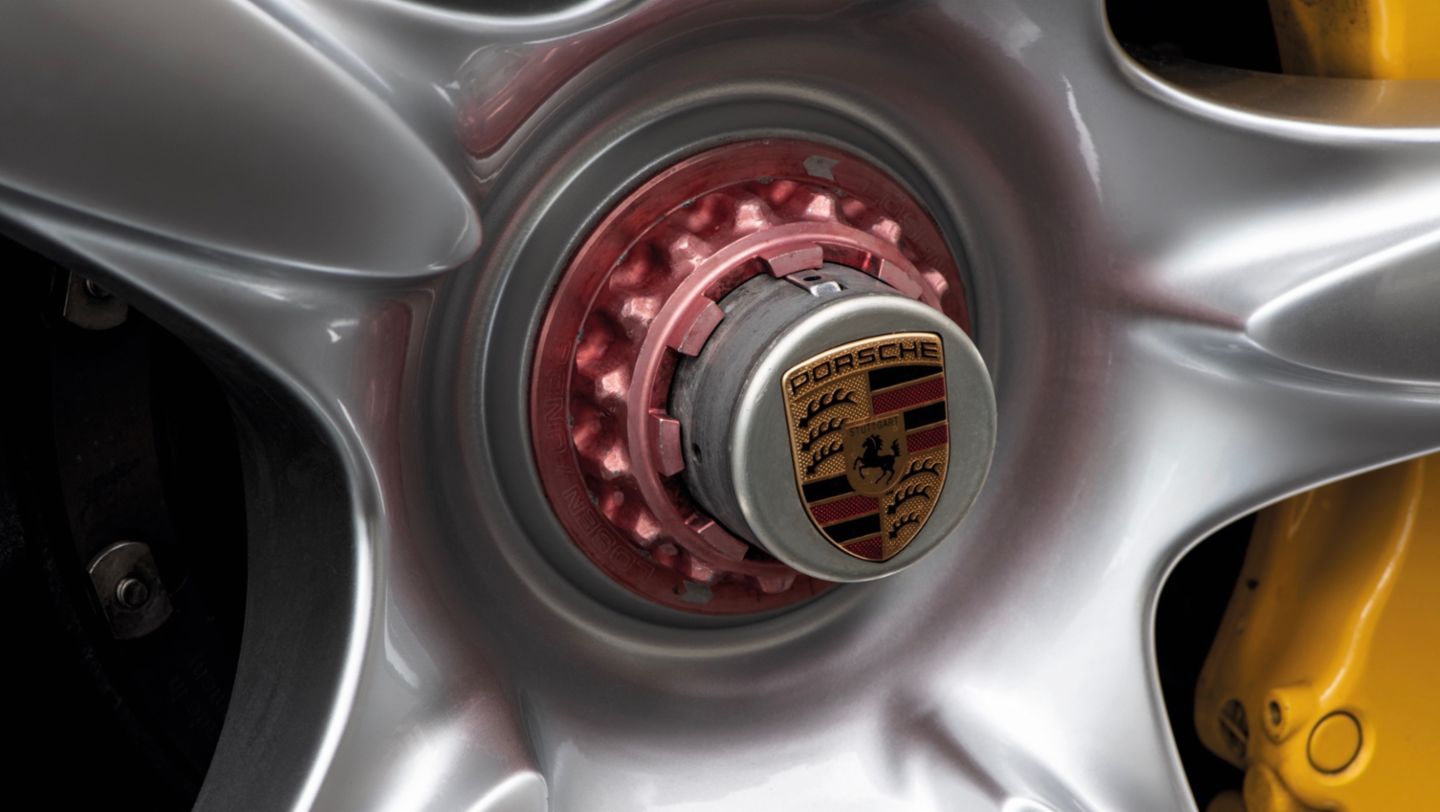 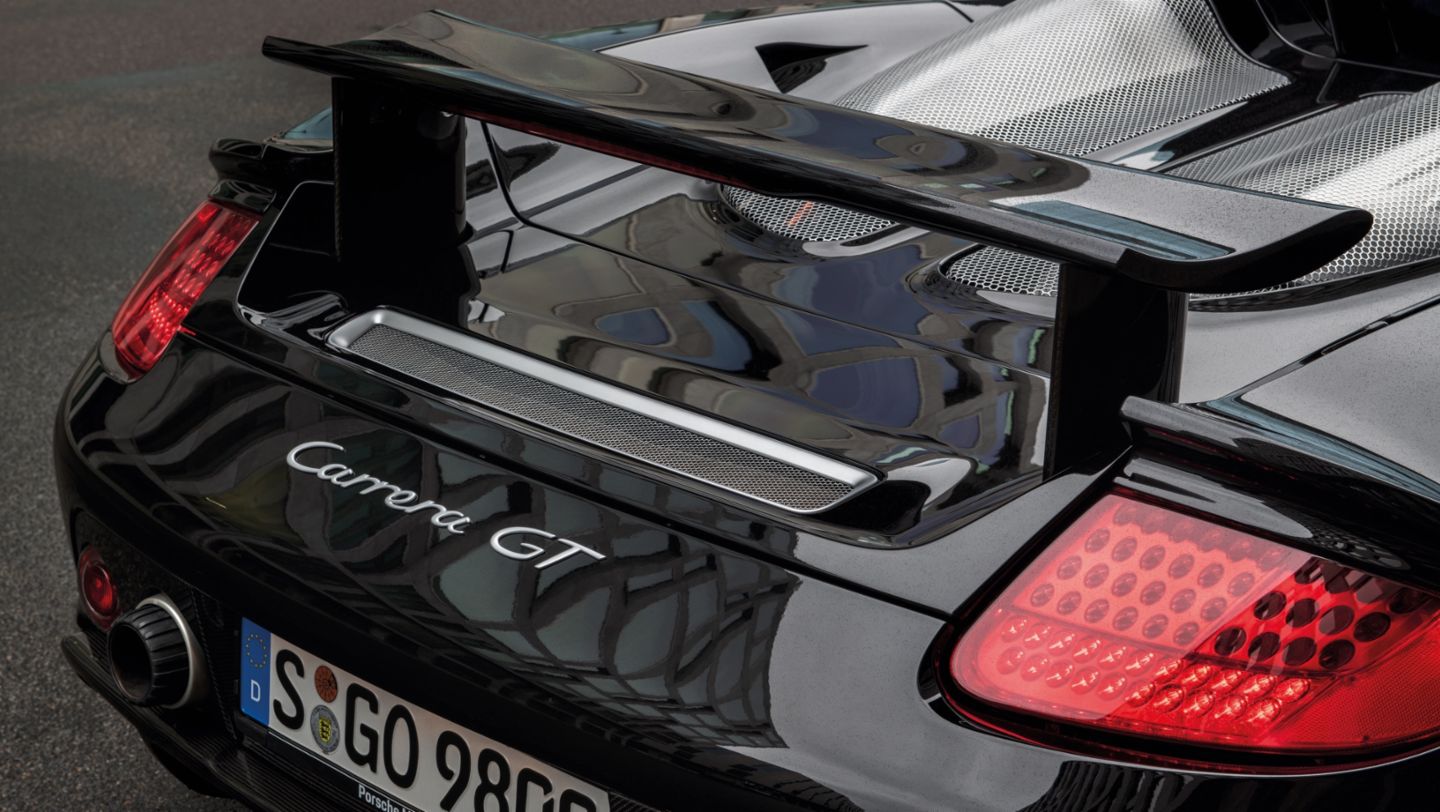 In-house manufacturing in the Porsche factory in Leipzig

The biggest challenge, however, was making the monocoque chassis and the engine mount. For the first time in a standard-production Porsche, both were made entirely from lightweight but high-strength carbon fibre reinforced plastic. To this end, Porsche established its own manufacturing facility in the new Leipzig factory in 2003. Added to this were further fine details like moulded Kevlar and therefore also very lightweight seat shells, ceramic brake discs, double-wishbone pushrod axles (separate guidance and suspension) and the world’s first ceramic two-plate dry clutch. 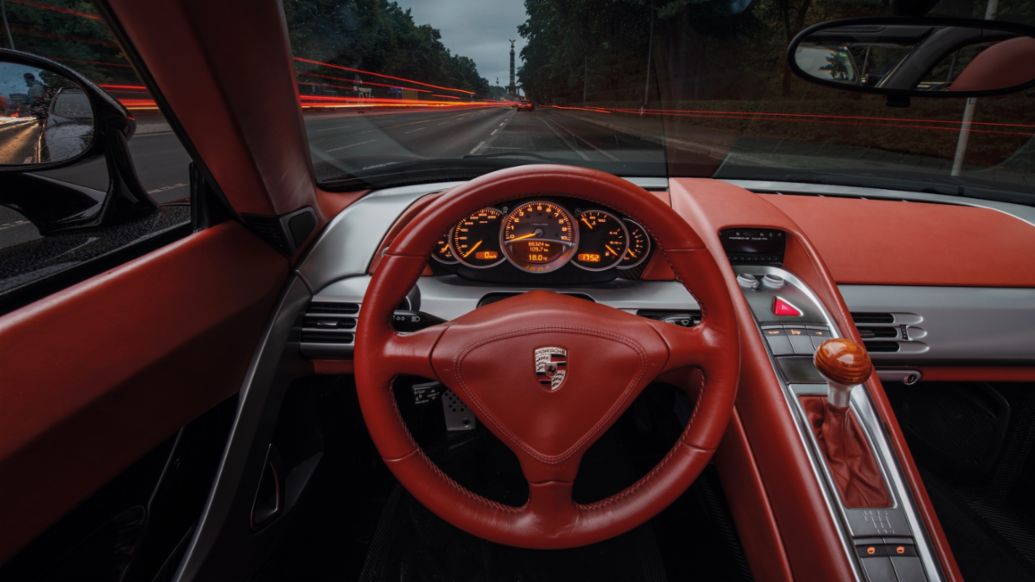 With a plate diameter of 169 millimetres, this extremely strong clutch is especially compact and makes it possible to achieve a very low centre of gravity for the V10 and the 6-speed manual gearbox. The displacement was increased from 5.5 to 5.7 litres compared with the concept car, and the power output rose to 612 PS. The point is that this power output is matched with a weight of just 1,380 kg – 2.25 kg per PS. What this means, in numbers: on the AVUS, the V10 catapults the car to 100 km/h in just 3.9 seconds. The gearshift is extremely precise; the high-placed laminated beech gear knob fits perfectly in the hand – a superb detail from the early days of motorsport and a subtle nod to the fact that the Carrera GT is still a racing car at its core, despite being road legal. And it is precisely this that makes this Porsche fascinating beyond compare. 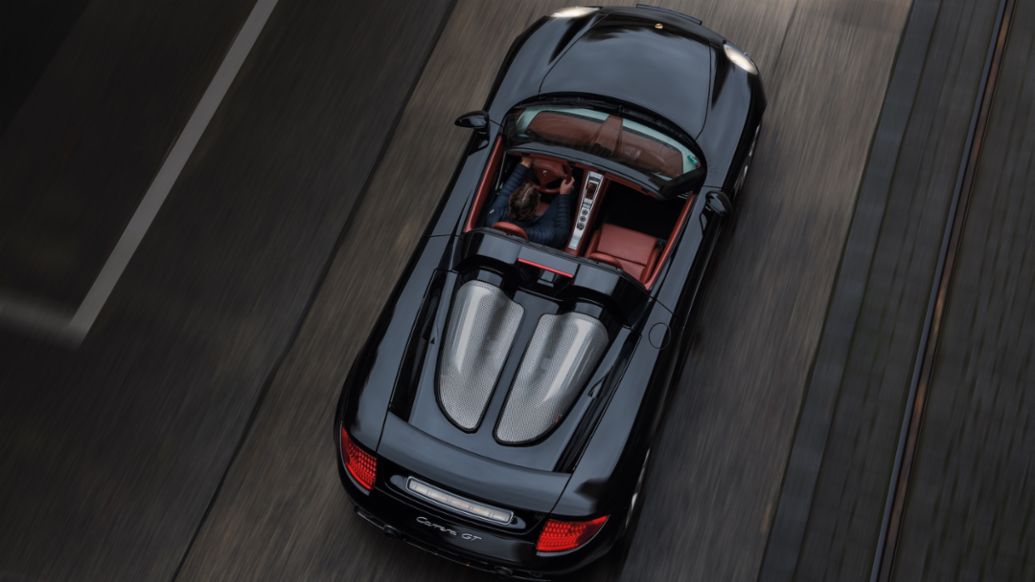 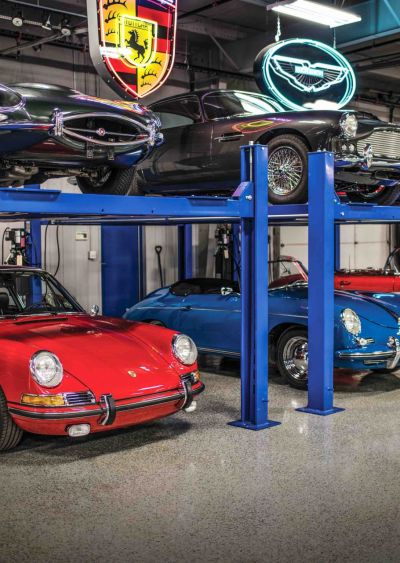 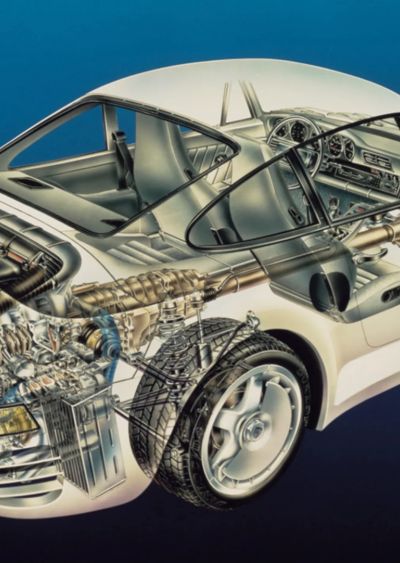 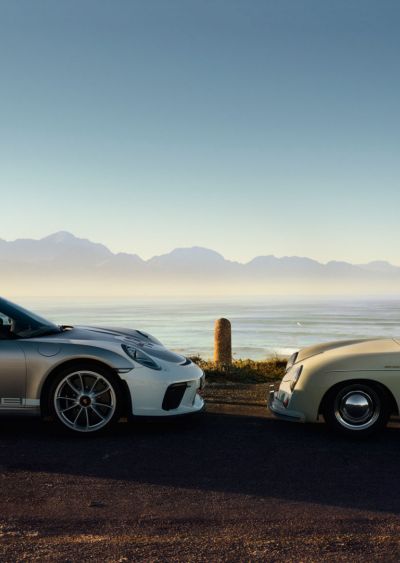 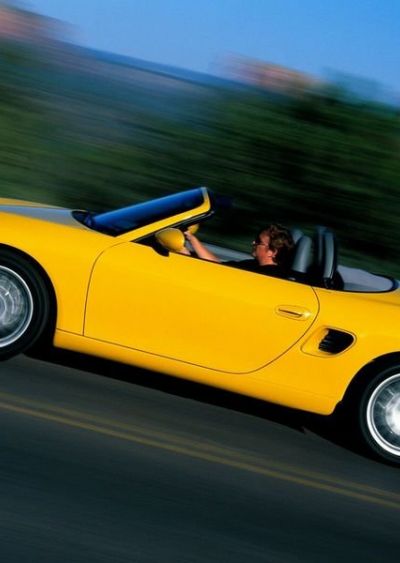